A winner -- and an exciting Middle Grade adventure!

First, I have a winner to announce. According to random.org, the winner of the signed hardcover copy of LULU AND THE DUCK IN THE PARK by Hilary McKay is:

JESS of the DMS


Congrats, Jess! Expect an email from me asking for your mailing address. The publisher, Albert Whitman, will mail the book directly to you.

And now, back to Marvelous Middle Grade Monday! 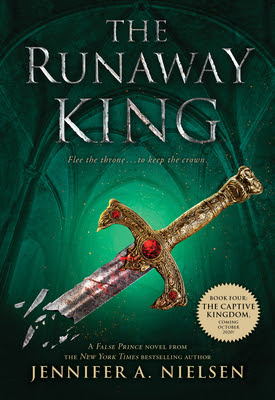 The Runaway King by Jennifer A. Nielsen (March 2013, Scholastic, Book Two in the Ascendance Trilogy, for ages 10 to 14)

Source: hardcover purchased from Children's Book World (my new favorite indie bookstore!)
Synopsis: Just weeks after Jaron has taken the throne, an assassination attempt forces him into a deadly situation. Rumors of a coming war are winding their way between the castle walls, and Jaron feels the pressure quietly mounting within Carthya. Soon, it becomes clear that deserting the kingdom may be his only hope of saving it. But the further Jaron is forced to run from his identity, the more he wonders if it is possible to go too far. Will he ever be able to return home again? Or will he have to sacrifice his own life in order to save his kingdom?

Why I liked it:  This is a fast-paced action/adventure novel (I don't consider it a fantasy, although the author certainly did a great job of worldbuilding when she created the three neighboring countries). There are parts where you hold your breath. And parts that make you cheer. I read this in one weekend, wanting to find out what happens to Jaron, especially when he joins the pirates. Be forewarned, these pirates have a hideout on land, so if you're looking for a ship-based story, this isn't it. I was fine with that, as I get seasick just reading about ships. But there's plenty of sword-fighting and clever hijinks.

Marvelous Middle Grade Monday is the brainchild of Shannon Messenger.