First, I need to announce the winner of the prize package of a paperback of Hattie Big Sky and an arc of Hattie Ever After!  According to random.org, the winner is:

Congratulations, Janet! Expect an email from me, asking for your mailing address.

Now to today's MMGMM. Yes, there's an extra M in there, for mystery.

I've been writing a middle grade mystery, so I thought it wise to read more mysteries over the past few months. And I really liked this one: 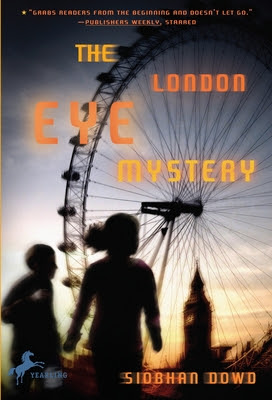 Synopsis (from Indiebound): Ted and Kat watched their cousin Salim board the London Eye, but after half an hour it landed and everyone trooped off—except Salim. Where could he have gone? How on earth could he have disappeared into thin air? Ted and his older sister, Kat, become sleuthing partners, since the police are having no luck. Despite their prickly relationship, they overcome their differences to follow a trail of clues across London in a desperate bid to find their cousin. And ultimately it comes down to Ted, whose brain works in its own very unique way, to find the key to the mystery.

Why I liked it: Oh, without a doubt the character of Ted! He wants to be a meteorologist when he grows up, so he's obsessed with weather forecasts. His autism is never defined, but he nonetheless works out puzzles in his head, counts his breakfast cereal Shreddies as he eats them, and doesn't like to be hugged. Dowd, who sadly died of cancer in 2007 at the age of 47, makes Ted both likable and memorable. Ted tells the story in first person and London comes to life through his eyes. The mystery kept me guessing, and I also liked the way Ted and his sister grow closer together while they try to figure out what happened to Salim.

What middle grade mysteries have you read lately?

For more MMGM posts, see Shannon Messenger's links or my sidebar.
Posted by Joanne R. Fritz at 8:30 AM