GEEKS, GIRLS... AND A GIVEAWAY!

Okay, the full title of today's MMGM feature is actually GEEKS, GIRLS, AND SECRET IDENTITIES and it's Mike Jung's action-packed debut novel.  Yes, I'm giving away a signed, hardcover copy.  Holy bananas! Another giveaway??  Yep. Details at the end of the post.  Marvelous Middle Grade Monday is the brainchild of Shannon Messenger. For other participants, see my sidebar or Shannon's links. 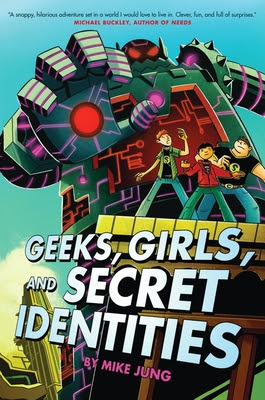 Geeks, Girls, and Secret Identities by Mike Jung, with illustrations by Mike Maihack (October 2012, Scholastic, for ages 8 to 12)

Source: hardcover purchased from Mrs. Dalloway's, an indie bookstore in Berkeley, CA -- wait, did I fly three thousand miles for a booksigning? Heck, no! When I read about Mike's launch, I preordered two copies. One for me. One to give away. And both are signed, including cool superhero doodles. 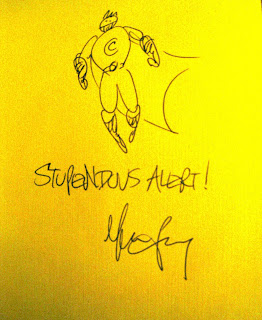 Synopsis (from Indiebound, naturally): Vincent Wu is Captain Stupendous's No. 1 Fan, but even he has to admit that Captain Stupendous has been a little off lately. During Professor Mayhem's latest attack, Captain Stupendous barely made it out alive - although he did manage to save Vincent from a giant monster robot. It's Vincent's dream come true... until he finds out Captain Stupendous's secret identity: It's Polly Winnicott-Lee, the girl Vincent happens to have a crush on. Captain Stupendous's powers were recently transferred to Polly in a fluke accident, and so while she has all of his super strength and super speed, she doesn't know how to use them, and she definitely doesn't know all the strengths and weaknesses of his many nemeses. But Vincent and his friends are just the right fan club to train up their favorite superhero before he (she?) has to face Professor Mayhem again. And if they make it through this battle for the safety of Copperplate City, Vincent might just get up the courage to ask Polly on a date.

Why I liked it:  Dude! Are you kidding? This would be so much fun if I was a 10-year-old superhero-loving geek!  It's fun anyway.  And I'm not.  Mike has created an original world, lovingly based on comic books, that's a lot like our world, only with superheroes battling bad guys on a regular basis. Vincent and his friends even get Captain Stupendous alerts on their cell phones.

Yes, Mike's blog was one of the first blogs I followed, way back in the dark ages of blogging, yo, and I'm totally one of his minions but that's not why I'm pushing his book. Geeks, Girls, and Secret Identities is a sure hit for both boys and girls in the traditional middle-grade age range.  It's crammed with action, realistic dialogue, and humorous situations (wait until you find out why big Max is Vincent's self-appointed bodyguard). It has conflict galore, humungous robots, evil scientists, a first crush, and a group of friends who argue and insult each other but would never let each other down.

And there's another reason all this is so cool: Mike can play the ukulele and sing. Yes! I'm thrilled that he chose an indie for his launch party and man, I wish I could have been there!

To enter the giveaway for the signed, hardcover copy, you must be a follower and you must comment on this post.  Extra entries for tweeting, mentioning on facebook, or mentioning on your own blog. Please let me know you've done that and if possible, give me the links.  International entries welcome.  This giveaway will end at 10:00 pm on Saturday November 3, 2012.  Good luck!
Posted by Joanne R. Fritz at 7:30 AM