UNGIFTED for MMGM -- and a Winner!


First, I have a winner to announce.  According to random.org, the winner of the hardcover copy of THE SEVEN TALES OF TRINKET by Shelley Moore Thomas is:


Congratulations, Michelle!  Expect an email from me asking for your mailing address.

Now for today's MMGM.  Marvelous Middle Grade Monday is the brainchild of Shannon Messenger. For other participants, see my sidebar or Shannon's links. 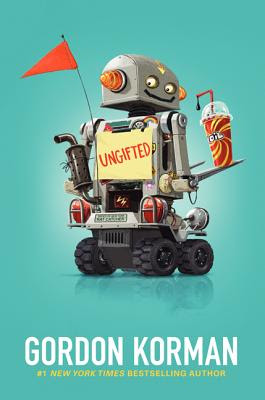 Ungifted by Gordon Korman (Balzer + Bray/Harpercollins, August 2012, for ages 10 and up)

Synopsis (from the back of the arc): The word gifted has never been applied to Donovan Curtis. It's usually more like Don't try this at home. So when the troublemaker pulls a major prank at his middle school, he thinks he's finally gone too far. But thanks to a mix-up, instead of getting in trouble, Donovan is sent to the Academy of Scholastic Distinction (ASD), a special program for gifted and talented students.

It wasn't what Donovan intended, but there couldn't be a more perfect hideout for someone like him. That is, if he can manage to fool people whose IQs are above genius level.

Why I liked it:  It's entertaining and hilarious! Despite being a troublemaker, Donovan's a likeable kid. The POV alternates between several characters, and their names and IQs are given at the beginning of each chapter. So you get Donovan's point of view (IQ: 112) followed by, say, Chloe's (IQ: 159) or Noah's (IQ: 206), or even that of their teacher, Mr. Osborne (IQ: 132) -- and it gives you a different take on what's really going on.

Gordon Korman has always been wonderful at making us care about his characters and at bringing out the humor in middle-school situations. I've been a fan of his since way back in the 1990s, with those very funny MacDonald Hall books.  Start with the first one, This Can't Be Happening at MacDonald Hall (which, amazingly, Gordon Korman wrote when he was 12!).   Find the author's official website here .


Like Bruno and Boots in those books, Donovan Curtis is a troublemaker. He may not be gifted in the traditional sense, but he might just be the one who can pull this group of misfit geniuses together and make them a team. I'd recommend this for anyone looking for a light, funny read and a book that both boys and girls can enjoy.