I was lucky enough to meet these two authors at this year's PAYA festival.  What's PAYA?  Bringing YA to PA is all about raising money for Pennsylvania libraries.  It was started by an ambitious high school student in 2008. There were over 30 authors at this year's festival, some of whom had already signed books for me at the bookstore (like A.S. King, Ellen Jensen Abbott, K.M. Walton, and Beth Kephart!).


Alissa Grosso is the author of POPULAR (and the more recent FEROCITY SUMMER, which I need to read next!).

Elisa Ludwig is the author of PRETTY CROOKED and the sequel PRETTY SLY (Coming March 2013 from Katherine Tegen Books/Harpercollins).

Elisa Ludwig website (Check out her cool book trailer on the main page!)


I'd met Alissa and Elisa once or twice before, but never got a book signed by either, so this was my opportunity. And I'm thrilled that I did. Both books are about high school cliques, but take vastly different approaches. 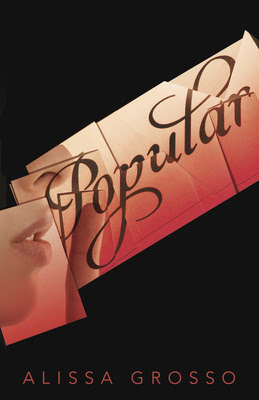 Alissa Grosso manages to pull off an amazing feat: juggling five different points of view from the five high school girls who form a tight clique at Fidelity High.  Hamilton Best is the queen of the clique, and her followers, Olivia, Nordica, Shelly, and Zelda, are squabbling among themselves and fighting to bring her down. Her boyfriend, Alex, seems moody and distant. Or maybe just confused.

But -- hold everything! -- this isn't just another Gossip Girls or Clique novel. The truth is not always what it seems in this fascinating psychological story. I read this in one day. And I was stunned. Willa Fox's artist mom has finally sold some paintings and they can settle into a real house for once, with the opportunity for Willa to attend a prestigious private school in Arizona. She quickly makes friends with some of the Glitterati of Valley Prep and finds herself swept up in shopping sprees and parties (and attracted to a hot guy).  But when the popular girls prove to be the power behind a mean-spirited website that bullies scholarship students, Willa decides to even the playing field by turning into a modern day version of Robin Hood.  Steal from the rich and go shopping for the poor girls:  what could be so wrong with that?  This is a fun, fast-paced read that isn't afraid to delve into some social issues of class and race differences.


What recent YA books have stolen your heart?