First, I have a giveaway winner to announce:  The winner of the hardcover copy of IF I LIE by  Class of 2K12 author Corrine Jackson is:

Congrats and expect an email from me asking for your mailing address!

Now for today's MMGM.  Marvelous Middle Grade Monday is the brainchild of Shannon Messenger.  Visit her blog for the links, or see my convenient sidebar to the right (and if you're not in there and you believe you should be, let me know).


Jerry Spinelli is one of my favorite authors. And not just because I've met him and I've actually seen him shopping in the bookstore several times!  You may remember my interview with him and my review of Jake and Lily from May. My all-time favorite Spinelli books are Stargirl and Maniac Magee.

Jerry said his favorite, of all the books he's written, is his first. Well, I was embarrassed that I'd never read the man's first book (at least, the first one he published, after four novels were rejected).  So I recently bought a copy and read it that same day. 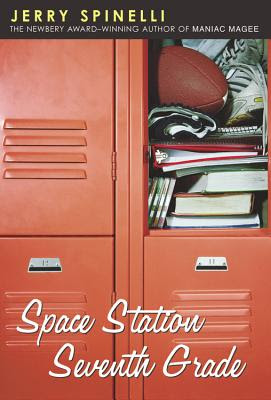 Source: paperback purchased at the bookstore

Synopsis (from the book cover): Seventh-grader Jason Herkimer struggles with all that junior high brings: pimples, puberty, football, school dances, and most of all, girls!

Why I liked it:  It's written in first person and that twelve-year-old (and later thirteen-year-old) boy voice is perfect.  The dialog between Jason and his friends (and between Jason and his parents) is hilariously realistic. Jerry might have delved into his own boyhood and recalled everything good and bad about being a seventh-grade boy in the suburbs.  Or maybe he simply listened to his own six children!  The structure is straightforward: it follows the school year, with chapter titles like Hayrides, Football, Girls, Snow.  This is very much a boy book, but girls could read it too.  It's a little dated, but I find it refreshing to read a book in which no one has a computer or a cell phone, and they all spend a lot of time outside!

Note that the space station of the title is a project Jason is building.  It's something he brags about to Debbie Breen, the cheerleader he has a crush on.

(I'll warn you that I was surprised to find the "s" word sprinkled throughout this book.  Yet in ten years as a bookseller, I've never heard any complaints about it from customers.)

And I hope you all saw the Los Angeles Times article (as mentioned by PW's Children's Bookshelf) proclaiming that the field of children's lit is still growing!  That's fantastic news for everyone who reads or writes children's books.
Posted by Joanne R. Fritz at 7:30 AM