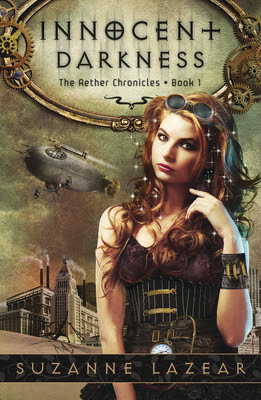 
INNOCENT DARKNESS:  Book 1, The Aether Chronicles (Flux, August 8, 2012, for ages 12 and up)
Wish. Love. Desire. Live.
In a Steampunk version of Victorian Los Angeles sixteen-year-old Noli Braddock's hoyden ways land her in an abusive reform school far from home. On mid-summer's eve she wishes to be anyplace but that dreadful school. Her wish sends her tumbling into the Otherworld.  A mysterious man from the Realm of Faerie rescues her, only to reveal that she must be sacrificed, otherwise, the entire Otherworld civilization will perish.

Suzanne Lazear writes Steampunk stories for adults and teens.  Her Young Adult Steampunk dark fairytale INNOCENT DARKNESS, book 1 of The Aether Chronicles, will be released from Flux on August 8, 2012. She always plays with swords, is never described as normal, and has been known to run with bustles. Suzanne lives in Southern California with her daughter, the hubby, a hermit crab, and two chickens, where she’s currently attempting to make a raygun to match her ballgown. Visit her blog at http://www.suzannewrites.blogspot.com and her website http://www.suzannelazear.com

Hi Suzanne, and welcome to My Brain on Books!

Do you outline before you write? If so, does it end up changing before you finish the first draft? What change surprised you the most?

Well, INNOCENT DARKNESS didn’t start out Steampunk.  I steampunked it on the fly from a contemporary outline.  My main characters—Noli, V, and Kevighn--stayed the same but new characters like Charlotte appeared. The basic story stayed the same, but adding in the Steampunk elements forced me to change a lot of things, and I had to create an entire alternate world as I went along (which required research and strange google searches).  From this process a lot of details I didn’t know about emerged, like Noli’s love of botany, Kevighn’s sister, and certain details about V and his past…I personally enjoy learning things about my characters as I write.  Not all stories are like this for me.  Sometimes I outline, sometimes I don’t, and sometimes I just jot down ideas.  It all depends on the story, world, and characters.

I like to have several projects in different stages going on at once. It makes me feel more productive.  I work on the one that’s most pressing (or if not on deadline, with the characters speaking the loudest), but if I get burned out or need a break, I can switch to another project for a day or two and feel like I’m still being productive.  Also, I have something to do while a project is off being read by betas.  It’s that whole multi-tasking thing.  I like multi-tasking.  And lists.

Coffee, tea, or hot chocolate while writing? And where do you write? Briefly describe your writing space.

Because I have a full time job and a family I write whenever and wherever I can. I do a lot of writing on my laptop on the couch. I write during lunch at work, I’ve been known to bring my laptop to birthday parties and family functions when on deadline, I’ve even contemplated trying to use Dragon to write while driving since I spend so much time commuting—but I’m not that brave and given my writing style, I’m not sure that would work for me.

Do you listen to music while writing or at least while thinking about and planning a book? What song or album had the most influence on this novel?

I really like to listen to music when I write and often make complicated playlists of “mood music” for each project.  For some reason I never made a special list of music to listen to just for the writing of this book – though I do have a soundtrack for it.  I wrote a bulk of INNOCENT DARKNESS during NaNoWriMo 2009 – 66k in three weeks—while working a dayjob so that may have had something to do with it.  Yeah, I nearly died.  I did write large chunks of ID while listening to Emilie Autumn on continuous repeat—especially “Across the Sky,” which I consider to be the book’s theme song, as well as “Shallot” and “Opheliac”.  I adore her work, she’s a “Victorian industrial” artist and since I’m writing Steampunk, the vibes meshed really well.  I also listened to a playlist of sappy love songs I’d compiled for drafting another project—especially when writing the kissing parts.

Wow!  That sounds daunting.  I love that your book has a theme song.  Tell us what darling you had to kill that you really really wish you could have kept and what was the most fun to write.
More kissing!!!  Just kidding.  I actually had to cut an entire scene with Kevighn, my anti-hero, that I really liked.  It introduces a new character towards the end, so it does work better to save it for book two, but I really liked the relationship between Kevighn and that character.  It added a more little background and depth to my naughty huntsman. My favorite scenes involve Noli—Noli and her flying car, Noli and her friend Charlotte, Noli and V…  Though I do have to say, Kevighn, being the bad boy, was really fun to write.  Probably even more fun to write than V, who’s such a sweet, honorable guy.  Inventing all the steampunk gadgets was a ton of fun as I tried to meld the Victorian feel with modern technology to get things like hoverboard and flying cars, yet make them as natural to Noli as a car is to us.
Thank you so much for having me on today!

Thanks for being here, Suzanne! And congrats on the book!