I have a winner to announce!  According to random.org, the winner of the hardcover copy of MAY B. by Caroline Starr Rose is...
VIVIEN
Congrats, Vivien!  Expect an email from me asking for your mailing address! (Readers, this is a great example of persistence paying off.  I think Vivien has entered every giveaway I've ever had and this is the first time she's won.)
Now on to today's MMGM, a new book from Christopher Paul Curtis! 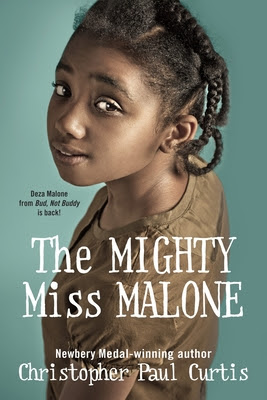 
Synopsis (my own this time!): Deza Malone loves words and reading and is the smartest girl in her class.  She has a strong and loving family: a father who enjoys using alliteration (“Dearest Daughter Deza”), a mother who quotes Robert Burns, and an older brother who can’t read very well but who sings like an angel. She also has a best friend who goes to the library with her every day.  If the Great Depression hadn’t come along and made Father lose his job, life in Gary, Indiana would still be wonderful.
The year is 1936, and times are tough for everyone, but especially for African-Americans.  Father goes to Detroit to find work -- and disappears. When Mother loses her job too, the Malones have to move into temporary housing.  They can only take what they can carry.
Christopher Paul Curtis is the award-winning author of Bud, Not Buddy, The Watsons Go to Birmingham, and other fine novels.  According to the included author note, during school visits kids always asked when he was going to write about a girl.  He kept putting it off, until he spoke at a mother-daughter book club in Detroit. Some of the women berated him for including a scene in Bud, Not Buddy, in which a girl in the Hooverville kissed Bud Caldwell, a total stranger!  Mr. Curtis came up with an interesting reply. And this book, a companion but not a sequel, was born.
Why I liked it:  The characters are complex and real and engaging. Even if you’ve never read Bud, Not Buddy, you’ll still enjoy reading about the irrepressible Mighty Miss Malone.  You'll gasp at the hardships her family endures, and cheer at the way they support each other through the tough times.

The Newbery awards will be announced next Monday (here's the ALA Youth Media Award website).  This book came out too late for a 2012 award, but keep it in mind for 2013.  I predict it will win at least an honor.
What do you think will win the Newbery medal and honor awards this year?  I'd like to see Words in the Dust by Trent Reedy win an honor.  See?  I'll bet you've forgotten that book already.  It came out last January and I reviewed it at this post.  I also hope Hound Dog True will win an honor (reviewed here).  But I'm at a loss as to what will win the gold.   Wonderstruck?  R My Name is Rachel?  What are your guesses?

Marvelous Middle Grade Monday is the brainchild of Shannon Messenger. Other regulars include (but are not limited to):
Shannon O'Donnell at Book Dreaming
Myrna Foster at The Night Writer
Natalie Aguirre at Literary Rambles
Brooke Favero at Somewhere in the Middle
Deb Marshall at Just Deb
Barbara Watson at her blog
Anita Laydon Miller at her middle grade blog
Michael G-G at Middle Grade Mafioso
Pam Torres at So I'm Fifty
Ms. Yingling at Ms. Yingling Reads
Danika Dinsmore at The Accidental Novelist
Jennifer Rumberger at her blog
Akoss at Nye Louwon--My Spirit
Gabrielle Prendergast at angelhorn
Sheri Larsen at her blog
Posted by Joanne R. Fritz at 6:30 AM