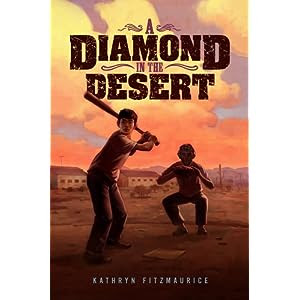 The ALA Youth Media Awards will be announced in Dallas today at 7:45 AM CST.  I'll be listening in (here's their webcast site) to see what wins.  They'll also be tweeting (@ALAyma).


In the meantime, here's a future Newbery possibility:

Synopsis (from Indiebound): For Tetsu, baseball is so much more than just a game.

On December 6, 1941, Tetsu is a twelve-year-old California boy who loves baseball. On December 7, 1941, everything changes. The bombing of Pearl Harbor means Tetsu's Japanese-American family will be relocated to an internment camp.

Gila River camp isn't technically a prison, but with nowhere to go, nothing to do, and no time frame for leaving, it might as well be. So when someone has the idea of building a baseball diamond and starting a team, Tetsu is overjoyed. But then his sister gets dangerously sick, forcing him to choose between his family and his love of the game. This is an impeccably researched, lyrical story about baseball, honor, and a turbulent period in U.S. history.

Why I liked it: Kathryn Fitzmaurice's luminous prose verges on the poetic.  Many of the chapters are short, more like vignettes of life in Gila River.  So it should appeal to reluctant readers, especially if they like baseball.

But even if you're not a baseball fanatic, you'll still find many reasons to read about Tetsu and his family and the harsh conditions at the internment camp.  Note that this is for upper middle grade.  Fitzmaurice doesn't gloss over the difficulties.  This is a work of fiction, but she did staggering amounts of research and interviewed the real Tetsu who played baseball at that internment camp.

I learned a lot from reading this book.  Imagine being forced to leave your home and your dog and move to a reservation in the middle of the desert, with sparsely-furnished barracks and nothing to do, not even a school at first.  Imagine fifty-six families sharing one latrine.  Imagine dust storms that sicken people.  It's hard to believe today.  But it really happened.

My mother grew up in Los Angeles and was about the same age as Tetsu in 1942.  She well remembers some of her classmates who were Japanese-Americans being in class one day and not the next.  It was a dark time in our history.  Kathryn Fitzmaurice, author of The Year the Swallows Came Early, shines a brilliant light on that time period and makes us realize what Japanese-Americans endured then.

What middle grade historical fiction are you passionate about?


Marvelous Middle Grade Monday is the brainchild of Shannon Messenger. Other regulars include (but are not limited to):
Shannon O'Donnell at Book Dreaming
Myrna Foster at The Night Writer
Natalie Aguirre at Literary Rambles
Brooke Favero at Somewhere in the Middle
Deb Marshall at Just Deb
Barbara Watson at her blog
Anita Laydon Miller at her middle grade blog
Michael Gettel-Gilmartin at Middle Grade Mafioso
Pam Torres at So I'm Fifty
Ms. Yingling at Ms. Yingling Reads
Danika Dinsmore at The Accidental Novelist
Jennifer Rumberger at her blog
Akoss at Nye Louwon--My Spirit
Gabrielle Prendergast at angelhorn
Sheri Larsen at her blog
Posted by Joanne R. Fritz at 5:00 AM