Welcome, new followers!  It never ceases to amaze me that I acquire new followers even while I'm on a blogging break.  Thank you!  Speaking of the blogging break... I managed to write more than 4000 words and I'm thisclose to finishing the rough of my second MG novel!  Yay!  Hope you're all accomplishing great things too. 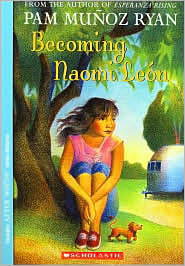 Source: paperback from a friend

Synopsis (from Indiebound): Naomi Soledad Leon Outlaw has had a lot to contend with in her young life, her name for one. Then there are her clothes (sewn in polyester by Gram), her difficulty speaking up, and her status at school as "nobody special." But according to Gram, most problems can be overcome with positive thinking. And with Gram and her little brother, Owen, life at Avocado Acres Trailer Rancho in California is happy and peaceful...until their mother reappears after seven years of being gone, stirring up all sorts of questions and challenging Naomi to discover and proclaim who she really is.

Why I liked it:  So many reasons!  The characters are wonderful, the details authentic, the situation heartwrenching. When Naomi and Owen's mother Skyla wants to take only Naomi back, not Owen, you quickly realize just what kind of person Skyla is.  And Naomi will have to learn to speak up if she doesn't want to lose Owen and Gram.  I cheered when Gram makes the decision to take the trailer and head to Mexico to seek the children's long-lost father.  The ending was not at all what I expected, but I found it realistic and satisfying.

This is also a great read for this time of year!  I've never been to Mexico, but after reading this, I'd love to go. I learned a lot about Las Posadas ("the inns"), a nine-day Advent celebration revolving around Mary and Joseph's search for a place to stay.  Different families play host each night from December 16 to December 24, and the neighborhood children go from house to house, being turned away until they reach the designated house. There, they are welcomed with food, drink, and pinatas.

If you're looking for a multi-cultural read for Christmas, look no further.  What middle grade books have you read that revolve around a holiday?


Marvelous Middle Grade Monday is the brainchild of Shannon Whitney Messenger. Other regulars include (but are not limited to):
Shannon O'Donnell at Book Dreaming
Myrna Foster at The Night Writer
Sherrie Petersen at Write About Now
Natalie Aguirre at Literary Rambles
Brooke Favero at Somewhere in the Middle
Deb Marshall at Just Deb
Barbara Watson at her blog
Anita Laydon Miller at her middle grade blog
Michael G-G at Middle Grade Mafioso
Pam Torres at So I'm Fifty
Ms. Yingling at Ms. Yingling Reads
Danika Dinsmore at The Accidental Novelist
Jennifer Rumberger at her blog
Akoss at Nye Louwon--My Spirit
Gabrielle Prendergast at angelhorn
Posted by Joanne R. Fritz at 5:00 AM