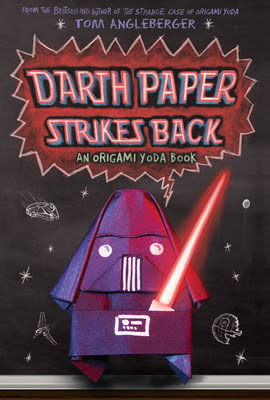 The hilarious, clever, and much-anticipated follow-up to the breakout hit, The Strange Case of Origami Yoda!

If you've never read The Strange Case of Origami Yoda, you should run right out and read that first.  Darth Paper works best as a sequel to that first book.  But both stand out as very funny books more for boys, though girls can certainly enjoy them too. They're all about life in middle school.  Classes, teachers, cafeteria food,  humiliating school dances, the whole bit.  Specifically, the conflict here is whether or not Origami Yoda is real, or it was just Dwight saying all those wise things that helped so many people.  The books even include helpful instructions on how to fold your own origami Yoda or Darth.

As a bookseller, I can tell you I've hand sold zillions of these books, especially to fans of Diary of a Wimpy Kid who are looking for something else in the same vein.  The pages of Darth Paper look like crumpled notebook pages (you find out why eventually), complete with handwritten notes and little drawings.  These books are perfect for Star Wars fans, especially anyone who's ever pretended to talk like Yoda or Darth Vader.  C'mon, admit it.  You've done this.  At least once.


Marvelous Middle Grade Monday is the brainchild of Shannon Whitney Messenger. Other regulars include (but are not limited to):
Shannon O'Donnell at Book Dreaming
Myrna Foster at The Night Writer
Sherrie Petersen at Write About Now
Natalie Aguirre at Literary Rambles
Brooke Favero at Somewhere in the Middle
Deb Marshall at Just Deb
Barbara Watson at her blog
Anita Laydon Miller at her middle grade blog
Michael G-G at Middle Grade Mafioso
Pam Torres at So I'm Fifty
Ms. Yingling at Ms. Yingling Reads
Danika Dinsmore at The Accidental Novelist
Jennifer Rumberger at her blog
Akoss at Nye Louwon--My Spirit
Gabrielle Prendergast at angelhorn


Remember my YA giveaway for a pre-order of CRACKED by K.M. Walton!  Go to this post to enter.
Posted by Joanne R. Fritz at 12:15 AM