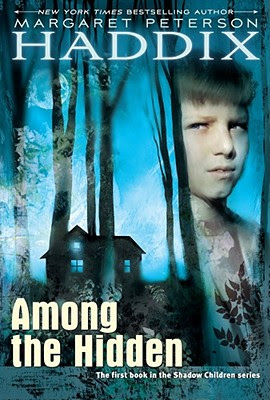 Note that these books should be read in order, starting with Among the Hidden, hardcover published 1998, paperback March 2000, Simon & Schuster (for ages 8 to 12, though it may be more appropriate for 10 to 14 due to intense situations and issues raised).

I love all seven of these books, but to keep this short I'll just talk about the first one, Among the Hidden.


Source:  paperback purchased from the store where I work!


Synopsis (from the publisher):
Luke has never been to school. He's never had a birthday party, or gone to a friend's house for an overnight. In fact, Luke has never had a friend.
Luke is one of the shadow children, a third child forbidden by the Population Police. He's lived his entire life in hiding, and now, with a new housing development replacing the woods next to his family's farm, he is no longer even allowed to go outside.

Then, one day Luke sees a girl's face in the window of a house where he knows two other children already live. Finally, he's met a shadow child like himself. Jen is willing to risk everything to come out of the shadows -- does Luke dare to become involved in her dangerous plan? Can he afford not to?

Why I liked it:  Thrilling and suspenseful, these books were dystopian long before it became a buzzword.  The worldbuilding is masterfully done.  The characters seem real (and you'll find yourself rooting for them from the beginning).

Although these books have been out for years, they're among my favorite middle grade novels of all time.  Haddix has a newer series now, but I often steer customers toward these instead.  Compelling?  You bet!  Once you start reading, you won't be able to stop.  In fact, you'll find yourself racing through these books to find out what happens.

I read the first two books before I started working at the bookstore.  Back then I was reading them with my kids.  Books 3 through 7 pubbed since I came to the store.  I devoured each one as soon as it appeared.  You lucky people who haven't read them before can now read one right after the other without having to wait.

UPDATE:  Sheri Larsen talks about The Samantha Granger Experiment and has an author interview AND a  giveaway on her blog.

And Michael Gettel-Gilmartin joins the MMGM community in his blog, Middle Grade Mafioso.
Posted by Joanne R. Fritz at 4:57 AM