(Ooo, I like the alliteration in that title!)
Thanks to Shannon Whitney Messenger, who raved about them in this post from last year, I discovered The Grey Griffins by Derek Benz and J.S. Lewis.  And I especially love their new series, The Clockwork Chronicles. 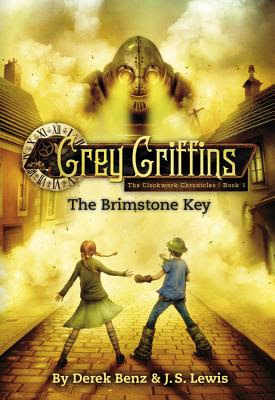 Book 1, The Brimstone Key is now out in paperback!  Book 2, The Relic Hunters just pubbed in hardcover, both from Little, Brown, for ages 8 to 12. 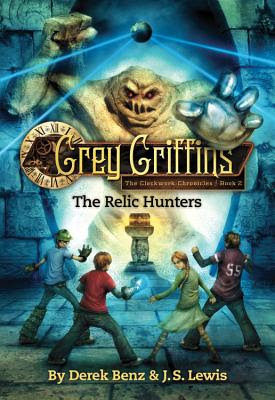 Source: advanced reading copies from the publisher
Synopsis of Brimstone Key (from the publisher):
A brand new adventure starring The Grey Griffins!
Max---the leader
Natalia---the brains
Ernie---the changeling
Harley---the muscle
A year ago, the Grey Griffins were just regular kids from Avalon, Minnesota. That was before they learned about the existence of evil fairies, werewolves, and other things that go bump in the night. Now they are monster-hunters, celebrated heroes, and allies to the legendary Templar knights---but even heroes have to go to school. When the Griffins enroll at Iron Bridge Academy, a school to train young recruits in the fight against the forces of evil, they find themselves at the center of a whole new adventure. The Clockwork King, a Templar foe from days past, has returned to finish the plan he set in motion decades ago. A plot to steal the souls of changelings---humans infused with fairy blood and supernatural abilities---in order to power his army of clockwork war machines. In The Brimstone Key, authors Derek Benz and J.S. Lewis deftly blend the mystical wonder of steampunk with magic and adventure to create an action-packed thrill ride.

Why I liked it:   It's fun! Nonstop action and adventure with four great characters who always have each other's backs.  I love the world that Derek Benz and Jon Lewis have created, filled with magic and high-tech gadgetry.  I'm a sucker for books about kids with special talents attending a prestigious academy, and no, this is definitely not Harry Potter!  The steampunk element really ratchets up the excitement. And there are plenty of sly inside jokes, like when Ernie has to report to Sendak Hall.  So clever.  My hat's off to Derek and Jon.
Marvelous Middle Grade Monday is the brainchild of Shannon Whitney Messenger.
Other regulars:
Shannon O'Donnell at Book Dreaming
Myrna Foster at The Night Writer
Sherrie Petersen at Write About Now
Natalie Aguirre at Literary Rambles
Brooke Favero at Somewhere in the Middle
Deb Marshall at Just Deb
Ally Beecher at Kid Lit Frenzy
Barbara Watson at Novel and Nouveau
Anita Laydon Miller at her middle grade blog

UPDATE: adding Michael G-G at Middle Grade Mafioso
And now for the Giveaway!
As a bookseller, I often get to meet really cool people. Derek and Jon stopped by the bookstore recently, and since, uh, there weren't many customers (it was kind of a last minute stop for them), they talked to me and another bookseller for a while and then both got busy signing stock and sprucing up my display in their own unique way.  Thanks, guys! 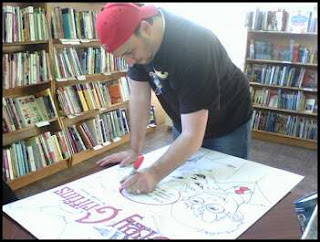 While Jon was busy drawing this poster for the bookstore...

...Derek concentrated on drawing original illustrations next to the half title pages in The Brimstone Key and The Relic Hunters. 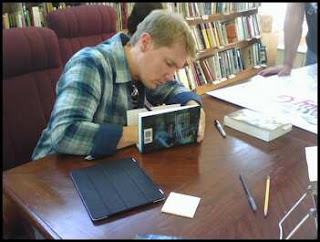 And because of their visit, I'm excited to offer a
fantastic giveaway this week. *

One SIGNED hardcover copy of The Brimstone Key goes to one lucky winner.

One SIGNED hardcover copy of The Relic Hunters goes to ANOTHER lucky winner.

These aren't merely signed by both authors.  They're decorated with original art by Derek Benz. They look like this:

All you have to do to enter is:

UPDATE: This giveaway is now CLOSED.  I'll announce the winners on Monday May 23. 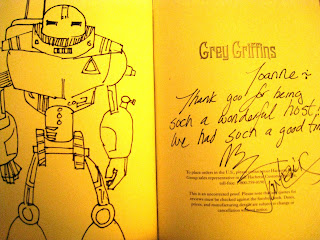