Perhaps I should be calling these Gems of the Month, since I'm posting so rarely. Thanks to anyone who's still hanging in there reading this blog. I've turned into a haphazard blogger.

Recently I was involved in a discussion with other writers about world-building. As in, you're writing a science fiction or fantasy novel for kids or teens, and you need to create a world that's believable. How do you go about it? 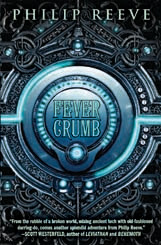 In this stunning prequel to the Mortal Engines series, a prequel that works just fine as a stand-alone novel, we meet Fever, an orphan in London. The London she lives in is thousands of years in the future, though it feels like the Dark Ages. Vestiges of technology remain -- odd bits of circuitry and microchips. But no one knows what to do with them. The Order of Engineers, a group of eccentric men who shave their heads and refuse to show emotions, try to make sense out of the old machinery. Fever has been raised by them, and mostly by Dr. Crumb, the man who found her when she was an infant.

But now everything's changing. An archeologist named Kit Solent hires Fever to be his assistant and it quickly becomes apparent that he's more interested in finding out what's going on in Fever's mind. She's beginning to have memories that are not hers. Who exactly is Fever Crumb? Who were her parents? Does she have anything to do with the Scriven, the superior humans driven out of London years ago?

Written with a sure hand, and a touch of cheeky humor (in the future, there's a krishna-like group wandering around London chanting, "Hari Hari, Hari Potter"), this is a fascinating example of masterful world-building. If you're a fan of Scott Westerfeld or Philip Pullman, this is right up your alley.
Posted by Joanne R. Fritz at 8:38 PM