In the words of agent John Cusick, "Write first, tweet later" OR: I'm ba-aack... but not for long

Hey all. I'm back. Having accepted Laurie Halse Anderson's "Double-dog dare," I stayed away from this blog (and unfortunately all of yours, too -- ulp, sorry). I stayed away from Facebook and Twitter... and television (well, except for some of the Olympics). And I wrote.

I'm happy to say that the middle grade novel I was stuck on six months ago (I stalled out at 4983 words), now has seven chapters and 11,149 words! Woo hoo! And I'm finally starting to imagine where it's heading (I've never been big on outlining).

So there is something to be said for writing first and tweeting later. Where did that great quote come from? Cynthia Leitich Smith author of Eternal and Tantalize, among other titles) has a wonderful blog called CYNSATIONS. On March 2, she posted an interview with John Cusick, an agent (and soon to-be-published young adult author) who works at Scott Treimel NY. The interview itself is interesting reading, especially for aspiring writers. But the best part for me is the paragraph in which the interviewer, Jenny Desmond Walters, asks John if an online presence is important for writers. And he says for authors of teen books, yes. Published authors. But before you rush off to develop your web presence, read on. He then says:

"However, as an unpublished author seeking representation, your time is best spent developing your craft. Write first, tweet later."

Exactly what Laurie Halse Anderson was talking about. So I may pop in from time to time with a book review, but I won't be on here very much.


And I'll leave you with a few Gems of the Week (or Month?), because, of course, I've also been reading. I can't NOT read. That would be like, well, not breathing.


A NEST FOR CELESTE A Story about Art, Inspiration and the Meaning of Home, written and illustrated by by Henry Cole (Kathe 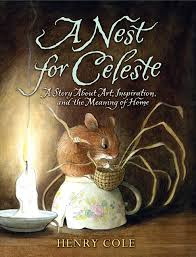 Adorable. I would have cherished this book when I was 8 years old. It's about a mouse in search of a safe home, the friends she meets, and in particular, a boy named Joseph who happens to be the assistant to the naturalist John James Audubon. You'll learn something about Audubon, and about New Orleans in 1821. Mostly you'll be charmed by this engaging tale, though it's not without its frightening moments (some grisly hunting scenes). With lots of lovely pencil drawings. This reminded me of The Rescuers by Margery Sharp, with illustrations by Garth Williams, or even The Mouse and the Motorcycle by Beverly Cleary.

COMING SOON TO A BOOKSTORE NEAR YOU: 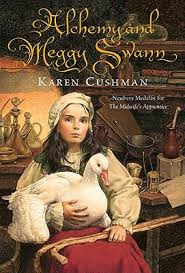 Meggy Swann has just arrived in London, having been sent away from her village by her mother. The father she never knew, an Alchemist, had asked for her. But after taking one look at her, with her sticks for walking, he ignores her, and Meggy is left to fend for herself. She has only her goose friend, Louise, for company. But Meggy is stubborn and smart and soon finds a way to make herself useful.

Set in 1573 (Elizabethan England, but before the time of Shakespeare), this is the newest novel by the author of Catherine, Called Birdy and The Midwife's Apprentice. The advanced reader's copy says the book is for ages 10 to 14, but I'd judge it fine for 8 to 12. 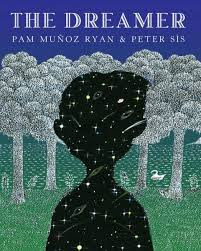 Stunning, poetic, and extremely thought-provoking. This beautiful dream of a novel is loosely based on the childhood of Chile's most famous poet, Pablo Neruda. It's the story of Neftali Reyes, a thin, sickly child who grows up collecting things: seashells, birds' nests, keys, words. Neftali wants to write, but his strict and demanding father wants him to study law or medicine.

Includes an author's note, some information about Pablo Neruda and a sampling of his poetry, as well as numerous illustrations by the Caldecott-winning artist Peter Sis. (Final art not in advanced reader's copy).

This book will win all kinds of awards. You heard it here first.
Posted by Joanne R. Fritz at 10:18 PM