SWITCH by Ingrid Law, a companion to SAVVY 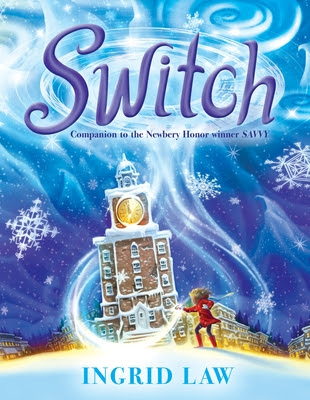 Synopsis (from Indiebound): Gypsy Beaumont has always been a whirly-twirly free spirit, so as her thirteenth birthday approaches, she hopes to get a magical ability that will let her fly, or dance up to the stars. Instead, she wakes up on her birthday with blurry vision . . . and starts seeing flashes of the future and past. But when Momma and Poppa announce that her very un-magical, downright mean Grandma Pat has Alzheimer's and is going to move in with them, Gypsy's savvy along with her family's suddenly becomes its opposite. Now it's savvy mayhem as Gypsy starts freezing time, and no one could have predicted what would happen on their trip to bring Grandma Pat home . . . not even Gypsy.

Why I recommend it: Fantastic voice, loads of imagination, and a really cool savvy. I'm a huge fan of Ingrid Law's first book, SAVVY, which won a Newbery Honor and was also the Number One Book Sense (now Indiebound) Children's Pick for Summer 2008. See my thoughts here, in the American Bookseller Association's archives. Another favorite, SCUMBLE (2010), is a companion to SAVVY which explores Cousin Ledge's unusual talent and how he learns to control it. Now, with SWITCH, another companion novel, we see the Beaumont family from the POV of Gypsy, younger sister to Mibs.

Bonus: Companion novels, instead of sequels, are a fun way to follow the same unusually-talented family but get to know different characters. Gypsy was only three in SAVVY, and now she's thirteen. It's like watching her grow up.

Favorite line: "The snowflakes hung like poetry over the city." (p. 239, after Gypsy freezes time)

I especially loved what happened when Gypsy stopped time, and wish I could do the same thing! What savvy do you wish you had?