THE UNLIKELY ADVENTURES OF MABEL JONES by Will Mabbitt - Guest post and giveaway! 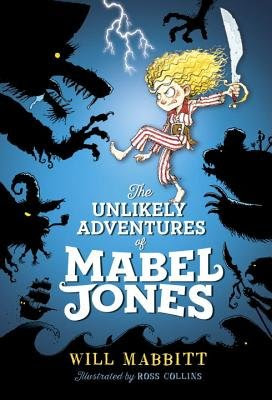 The Unlikely Adventures of Mabel Jones by Will Mabbitt (hardcover, Penguin Random House, June 2015, for ages 8 to 12)

Why I recommend it: I didn't expect to like this book. It really didn't seem like my cup of tea. Then I started reading. And before I knew it, I was giggling, then snorting, then laughing out loud. A rip-roaring, snarky adventure with a lovable cast of characters. I was most impressed by Will Mabbitt's imagination. And I adore the drawings by Ross Collins. This will appeal to kids who like quirky books and lots of adventure and laughs.

Bonus: Visit the website (http://mabeljonesbooks.com) for a terrific trailer, the cast of characters, and some super-fun activities. Seriously, allow some time to explore. You can even learn how to make invisible ink!

And now, for a special treat, Will very kindly wrote an exclusive guest post about his writing process and where he gets his ideas.

Take it away, Will:

I have my best ideas when I am daydreaming. This is usually when I am supposed to be doing something else. This habit really annoys people I am with because it involves me not listening to a word they are saying. My wife will ask something like “Did you hang the clothes up to dry?” and I will reply “How long would it take for a human to be digested by a whale?”

When I get an idea it gets stored somewhere in my head. Then I usually forget it. Sometimes though, the idea will pop out a bit later and I will start writing it down properly. I begin by finding somewhere to write. The Unlikely Adventures of Mabel Jones was written entirely on my daily train ride to and from London Bridge station. Now I mainly write in cafes. I’m writing this in a cafe as we speak. I’ve been here for hours but I’ve only bought one coffee. If the barista gets annoyed I will grudgingly buy the cheapest slice of cake that is available.

Sometimes I know that the words I write will never be used - maybe even this sentence right now will get deleted. If you are reading this then I guess it has made the grade. Sometimes I delete a whole days work. This makes me sad but I know that I need to do this to get to the days where I actually like what I write.

After the first draft is done I wait for as long as I can manage then print it out and read it to myself. There are usually loads of mistakes. I don’t worry about mistakes when I am writing the first draft. I just want to get to the end. Then before I show it to anyone I start to edit it. I love this part as every single thing I do makes the story better. If there’s enough time I’ll also show it to my older brother. He writes snarky remarks about punctuation and grammar in the margin. He is annoyingly helpful like that. Sometimes I’ll show it to my writing group. They are a lovely bunch who are great at spotting things that maybe I am too close to see.

In the old days that would be the end of the process. The story would get saved on my computer and never read again. Something different happened with The Unlikely Adventures of Mabel Jones. Someone at my writing group showed the first three chapters to an agent. The agent liked it and showed it to a publisher. The publisher liked it and then it became a book.

Now when I’ve finished something I always show it to my agent to check that it doesn’t have anything in it that will enrage my publisher. After all the swearing and violence has been taken out I send it on to my editor. Then I wait. The waiting is terrible. I haven’t been a professional writer very long and I am afraid they won’t like what I have written. Sometimes I think maybe they have got me confused for a different Will Mabbitt and commissioned the wrong book. Sometimes I imagine them all in a meeting laughing at how awful it is. Last time I was waiting for a manuscript back, my wife told me she dreamt I had received an email from my editor which just read: NOT FUNNY.

Luckily my editors are really nice and after a brief period of huffing, puffing, and moodily glaring out to sea I usually agree with their points - most of which are fairly minor. Then I change it for the last time. Then it’s done.

I love writing. I think I am very lucky to be able to do it everyday.

Thank you so much, Will! You are lucky to do what you love.

Now for the giveaway:  One lucky reader will win a hardcover copy of The Unlikely Adventures of Mabel Jones. To enter, you must be a follower of this blog and you must comment on this post. International entries welcome. If you spread the word via Twitter or Facebook (or other social media) please let me know and I'll give you extra chances for each mention. This giveaway ends at 10:00 pm EDT on Saturday July 11 and I'll announce the winner on Monday July 13, 2015.