The Luck Uglies by Paul Durham 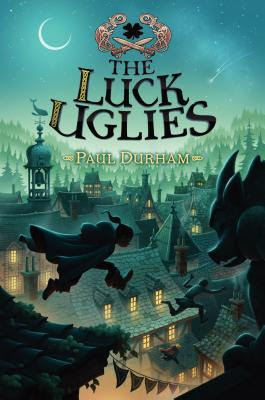 Synopsis (from the publisher): Strange things are happening in Village Drowning, and a terrifying encounter has eleven-year-old Rye O'Chanter convinced that the monstrous, supposedly extinct Bog Noblins have returned. Now Rye's only hope is an exiled secret society so notorious its name can't be spoken aloud: the Luck Uglies. As Rye dives into Village Drowning's maze of secrets, rules, and lies, she'll discover the truth behind the village's legends of outlaws and beasts . . . and that it may take a villain to save them from the monsters.

Why I recommend it:  If you love fantasy adventures, this book has everything you're looking for: a spunky, engaging heroine, scary monsters, intriguing secrets. There are also plenty of late-night shenanigans with Rye and her two best friends. Add to that a mysterious new resident named Harmless and the odd way Rye's mother has been behaving, and you won't be able to stop reading. A sweeping, highly imaginative tale that will be the first book in a trilogy. Yay!

Paul Durham's website (Love that he writes in an abandoned chicken coop at the edge of a swamp!)