Screaming at the Ump by Audrey Vernick for MMGM, plus An Interview! 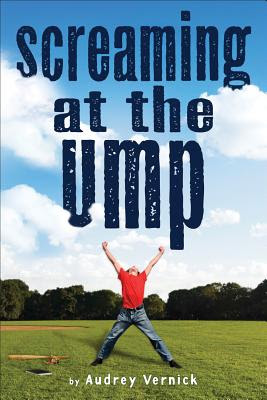 Source: I won this book from Rosi Hollinbeck, who blogs at The Write Stuff. Go visit! She has a lot of cool stuff on there.

Synopsis (from Indiebound): Twelve-year-old Casey Snowden knows everything about being an umpire. His dad and grandfather run a New Jersey umpire school, Behind the Plate, and Casey lives and breathes baseball. Casey's dream, however, is to be a reporter--objective, impartial, and fair, just like an ump.

But when he stumbles upon a sensational story involving a former major league player in exile, he finds that the ethics of publishing it are cloudy at best. This emotionally charged coming-of-age novel about baseball, divorce, friendship, love, and compassion challenges its readers to consider all the angles before calling that strike.

Why I recommend it:  Well, yes, I grew up with baseball. Some of my earliest memories include chasing fireflies around my backyard while my parents listened to the Phillies game on the radio. As a teen, I went to a lot of home games and knew all the players and their stats.

Surprisingly, though, I'm not much of a baseball fan now. Yet I still loved this book. Whether or not you love baseball, you'll enjoy reading Screaming At The Ump, especially for Casey's authentic voice and the wackiness of his best friend, Zeke.

The title gets my vote for Best Title So Far This Year. There's a lot of humor here, not just boy humor. But then the book goes deeper, which is what I love most about it. Vernick deftly handles not only Casey's feelings about his parents' divorce, but about the former major league player who shows up at Behind the Plate under a different name. Casey's struggle over doing what's right will resonate with the reader. This is one of those books you'll think about long after you've turned the last page.

And now for a special treat: an interview with Audrey Vernick!


1) I know you're a baseball fan and have also written some nonfiction picture books about baseball (Brothers at Bat; She Loved Baseball: The Effa Manley Story). What made you decide to write a novel about umpire school?

Long before there was instant replay in baseball, probably about seven years ago, there was one postseason in which the umpires got a lot of important calls wrong, calls that changed the outcome of games. Talk radio was buzzing with it. It made me wonder how umpires became major-league umpires. A little quick research revealed that they have to go to umpire school--there are two in Florida and all major league umpires started there. (Who knew?) I found it really intriguing, the mere fact that umpire schools exist.

Combine that fact with this:  I have a tendency to write too "quiet," to like character-driven work, which editors point out makes it hard for a title to stand out on their list. Knowing this about my writing self, I thought using an unusual setting might be enough to allow for a less-than-shocking-at-every-turn kind of plot. I don't enjoy reading plot-driven fiction, and I don't think I could even write it if I wanted to. Writing a book that takes place in an umpire school felt like it would give me a chance to write the kind of book I enjoy writing that might be publishable.


2) Well, you certainly hit it out of the ballpark with this one, Audrey. Could you tell us a little about your journey to becoming a published author? Did you start out writing picture books? If so, how difficult was the transition to middle grade novels?

Before I wrote for kids, I wrote literary short fiction. I published about a dozen stories in literary journals and magazines. I lived through the skin-hardening years of rejection then, for the most part. I switched to writing for children over a decade ago and the first book I wrote, Bark and Tim: A True Story of Friendship, was co-written with my sister Ellen Gidaro. It was an odd book, in that the illustrations kind of had to be the paintings of the artist Tim Brown, whom the book was about, so there we were--submitting a book complete with illustrations, the exact-wrong way to begin. It took a very long time to find a publisher--a small regional press in Tennessee. That book was published in 2003. My next book for children came out in 2010. I point to those seven years as my real learning curve.

There came a point where I wanted an agent to handle the submission side of things. There were so many fewer agents then than there are now, and the common thinking was that one needed to catch an agent's attention with a novel. Also, as the graduate of an mfa writing program, I always knew I'd have to write a novel SOME day. So I wrote my first one, Water Balloon. It was called Dandelion Summer then. It was hard. And I think writing novels is so hard. I remember the very tentative steps I took in the beginning, writing a chapter or two and needing to send it to a reader-friend right away, asking, "Is this how you do it?" The hard part, of course, is to keep doing it. When I had a finished, revised draft I found an agent and she submitted it widely and failed to sell it. It wasn't until many years later, working with my current (second) agent, that I decided to pull it out of the drawer and give it another try. I revised with an eye toward making it less quiet--not a lot less quiet, but enough. And I was lucky that the book found its meant-to-be editor, Jennifer Greene, at Clarion.

I find the process of writing picture books comes naturally to me. I have to work much harder on novels.


3) Oh, I agree. Writing novels IS hard! I'd love to hear about your writing process. Do you outline the entire novel before you write or are you a pantser? Or a little of both? Do you write every day?

Oh heavens, I have no real process. Over the years, I've learned to trust that when it's time to write, I'll write. (This could be classified, accurately, as deciding that it's okay to be undisciplined and possibly a little lazy). I do not outline, but I do like to have some idea about how my story will end, so I have a direction to write in/toward. I do not write every day. I go through patches when I work a lot--usually on several different projects. And when drafting novels, I usually have several 8,000-10,000 word days--awful words, to be clear, but words, to move me along, otherwise I'd never be able to do it. When I'm somewhere between halfway and two-thirds done, I usually try to come up with a list of scenes that will get me to the finish line. And I don't always write those in order.

My advice is to not conduct one's writing life the way I conduct mine.

4) I think you're doing just fine, Audrey. Everyone's writing process is different. Please tell us: what three MG authors have influenced you the most?
Three. Hm. Maybe I can do this. I can never pick a single favorite anything, but three?

My mom, Judy Glassman, wrote a wonderful middle grade novel, The Morning Glory War, which was accepted for publication a few months before she died (a sudden, unexpected death).
Lynne Rae Perkins wrote the book I wish I wrote in All Alone in the Universe.
Louise Fitzhugh, because I've probably reread Harriet the Spy more than any other book.


5) I’m so sorry to hear that about your mom, but how wonderful that you have her book. And I totally agree about Louise Fitzhugh! Now I'd better read All Alone in the Universe. For my final question: if you could live anywhere in the world, where would it be?

Because one has to factor in how close one's family and friends would be, I think I'm pretty content to stay right here. A little over an hour outside of NYC (without traffic, as in, in a world that doesn't exist), very short drive to the beach, short drive to family.
Lucky you! Thanks so much for being here, Audrey!

For other MMGM recommendations, see the links on Shannon's blog.