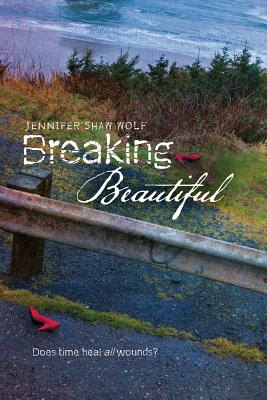 Synopsis (from Indiebound): Allie lost everything the night her boyfriend, Trip, died in a horrible car accident—including her memory of the event. As their small town mourns his death, Allie is afraid to remember because doing so means delving into what she’s kept hidden for so long: the horrible reality of their abusive relationship.

When the police reopen the investigation, it casts suspicion on Allie and her best friend, Blake, especially as their budding romance raises eyebrows around town. Allie knows she must tell the truth. Can she reach deep enough to remember that night so she can finally break free? Debut writer Jennifer Shaw Wolf takes readers on an emotional ride through the murky waters of love, shame, and, ultimately, forgiveness.


I'm thrilled that Jennifer agreed to take over my blog for the day and write a guest post!  Welcome, Jennifer!

The Books that Influenced Me as a Young Reader
At some point in when I was writing BREAKING BEAUTIFUL, the thought occurred to me, “This is turning into a mystery.” This idea was immediately followed by, “I can’t write a mystery.” Mysteries involved suspense and clues and complex plot structures and I wasn’t sure anything in my background had prepared me to write a book like that. Then I remembered what I’d read as a kid. There were a lot of mysteries. From Homer Price, to Nancy Drew, to Agatha Christie, to old Ellery Queen and Alfred Hitchcock mystery magazines, I loved trying to solve a puzzle.
I think that it started when I was about ten, with a series called THE THREE INVESTIGATORS. One of my first trips to our small public library, when I was old enough to pick out my own books, I stumbled upon THE THREE INVESTIGATORS. They were three boys who solved mysteries and they had the coolest hideout; an old trailer, buried under a pile of junk in a salvage yard. The hideout had entrances with names like “Tunnel One” and “One Eyed Dog.”
THE THREE INVESTIGATOR books were the first series I devoured from beginning to end. (At least to the end of the books our small town library had in its collection.) It didn’t matter that the protagonists were boys, or that they were older than me. Every couple of weeks I’d finish my pile of books and beg to go back to the library, so I could get more “THREE INVESTIGATORS” books.
I have since looked up THE THREE INVESTIGATORS to learn more about them. I found out that there were 43 books in the original series, with a 44th book unfinished because the series was canceled. (However, in Germany the series lives on.) The first book came out in 1964 with THE SECRET OF TERROR CASTLE and the series had four different authors starting with Robert Arthur, then Dennis Lynds writing as William Arden, Kin Platt writing as Nick West and Mary Carey writing as M.V. Carey. When I looked through the list of titles I could remember reading over twenty of them.
Recently as I watched my son discover and devour books for the first time with the Percy Jackson series, I thought back to THE THREE INVESTIGATORS. I can honestly say that those books were the books that turned me into a reader, and eventually lead me to being a writer. Maybe even a little bit of a mystery writer.
*   *   *   *   *
Jennifer, thanks so much for being a guest blogger today!  Oooh, I remember reading those old Ellery Queen mystery magazines.  And I read plenty of Agatha Christie, too.

I can't wait to read your book.  Congrats on your debut next Tuesday.  Readers, what mystery novel has influenced you?
Posted by Joanne R. Fritz at 8:44 AM