Shannon Whitney Messenger started this awesome meme and I'm slipping in to recommend another marvelous middle grade book from May 2010 that you may have overlooked. BOOM!

No, I'm not trying to startle you.

That's the name of the book. 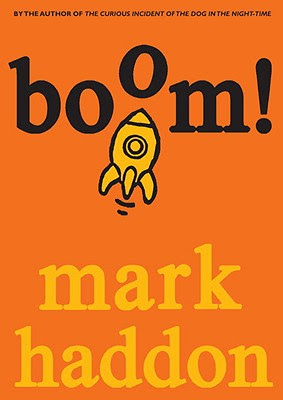 And you'll notice it's written by Mark Haddon, he of The Curious Incident of the Dog in the Night-time fame.  Yep.  Same Mark Haddon.

Which means this book is very British. And I applaud Random House for NOT Americanizing it. Yay!  I believe we should give kids some credit and let them figure out this stuff themselves.  Okay, so a biro is a pen and plasters are Band-aids. (I lived in England for a year, so I know some Brit slang.)  If kids don't know these and other terms, they can Google them or get it from context.  Right?

Kids ages 8 to 12 (and especially boys) should give this book a try because it's freaking hilarious.  Jim and his best friend Charlie overhear two of their teachers speaking a strange foreign language after school.  They say things like "Toller bandol venting," and "Loy garting dendle."

It doesn't take Jim and Charlie very long to figure out their teachers are aliens. There are a lot of shenanigans involving food, policemen, motorcycles, Jim's sister Becky, her cretin of a boyfriend, and a certain loch in Scotland.  The chapter titles alone are worth the price of the book.  I won't spoil this for you by going any further.

Just find a copy and read it.

Chances are good I won't be posting a MMGM post for the next few weeks because I'm up to my eyeballs in Christmas preparations (still haven't done my cards -- AGH!) and of course, I'm exhausted from increased hours at work (this is a bookseller's busiest time of year).  I'm also catching up on YA reading right now and *blushes* haven't read any new MG novels.

I did, however, manage to finish revising my third draft of my own MG fantasy novel.  And I'm now putting it on a back burner to simmer gently.  For several months.  Or a year.  Hope it doesn't boil over.

What about you?  Are you accomplishing what you need to this December?  And here's a different question: Do you think British kids' books should be Americanized, or not?
Posted by Joanne R. Fritz at 8:29 PM