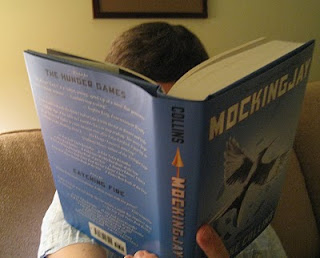 Well, unlike the lucky people who went to midnight parties and then read all day yesterday, I couldn't start reading it until last night, since I had to work all day yesterday (selling lots of copies of Mockingjay, the third and final volume in Suzanne Collins's Hunger Games Trilogy). I finished it this morning.


Was it worth it? Oh yes, by all means. Buy the book. Or borrow it from a friend. Or beg for it if you must. Will Katniss accept her new role as the Mockingjay, the face of the rebellion against the Capitol? What does this involve? Does it have anything to do with flaming arrows? And how will the rebels treat her and her family and friends? This is like a bizarre form of "Survivor" gone crazy, when even war is televised for entertainment. There's a terrific quote about bread and circuses, which you'll understand when you read the book.

You MUST read it for yourself.

Mockingjay is expertly crafted and plotted. It all comes together in the end. The writing is seamless. And Suzanne Collins is a master of the cliffhanger chapter ending, so you have to keep reading and reading and reading. She fires off one exciting event after another. Lots of familiar characters from the first two books return. And there are numerous surprises. I'm sure my mouth was hanging open at certain parts.

So much violence. Which reminded me an awful lot of Harry Potter and the Deathly Hallows. Too many deaths. No spoiler there -- this is war, people.

I won't tell you who dies, though.

And I definitely won't tell you who Katniss ends up with. I wouldn't want to spoil it for you if you're solidly on one "team" or another.

In fact, I'm taking a stand here. I may be the only one who feels this way, but -- dare I say it? -- the romance was NEVER an important part of Collins's trilogy. Never.

It's all about the folly of war.

And, perhaps not surprisingly, I'm reminded of the first sequence of children's books Suzanne Collins wrote, The Underland Chronicles, starting with Gregor the Overlander. Though written for a slightly younger audience, the Gregor books showed the senselessness of fighting and did it beautifully.

I'll leave you with a quote from Mockingjay:

"Because something is significantly wrong with a creature that sacrifices its children's lives to settle its differences... The truth is, it benefits no one to live in a world where these things happen."

Have you read it yet? What did YOU think? Was the romance the most important part? Or the war?
Posted by Joanne R. Fritz at 3:32 PM